Did you Catch What Brits Love Recently on Arte? 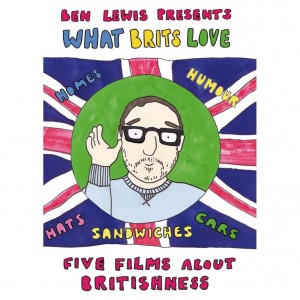 in What Brits Love

in What Brits Love

To all our wonderful fans in Germany, Arte has recently been re-running Ben’s fantastic What Brits Love series!

A new way of looking at Britain in the Twenty First Century – The values, passions, eccentricities and mindsets of British people today

A series about Britishness

What Brits Love is a five part series about being British, presented by Ben Lewis. It is a funny, warm, fresh, exciting, but also an insightful and critical view into what defines Britain at the outset of the twenty first century.

Five filmes – on sandwiches, hats, cars, humour and homes – explore what makes us Brits different from other nations today and what makes us great… and also occasionally where our weaknesses lie. Ben Lewis travels across the length and breadth of Britain, from castles in Scotland, to sandwich factories in the Midlands, hat festivals in Dorset and fashion designers in London. He meets people from every class and culture in Britain – the antique dealer who sells top hats for £6000 a piece and the hat designer who makes hats for the Queen; two ladies who have run a sandwich café for twenty years; fanatical members of the Morris Minor drivers club; the estate agents who sell Britain’s beautiful Victorian terraced homes; and the professor of Britain’s (and the world’s only) university degree in comedy.

Everywhere he goes Ben has bright and simple analyses to offer, but also much to learn. This is a journey of discovery: far more than a reporter, Ben Lewis gets involved in activities wherever he goes…

This is a celebration of Britishness – our inventiveness, humour and determination – but it does not shy away from pointing out some of our flaws – our class hierarchies, our vanities, and our contradictions. Ben Lewis’ aim is to present an honest and engaging portrait of his island nation today, in the style of his acclaimed series about contemporary artists, “Art Safari”.

Each film is full of beautiful cartoon graphics cards by Jess Pemberton, which give the viewers handy tips on how to be British – like recipes for great sandwiches and tips on how to wear a hat.

Catch it on Arte:

And if you’ve missed it, or you want to re-watch it, you can buy the DVD from our website here – What Brits Love DVD.