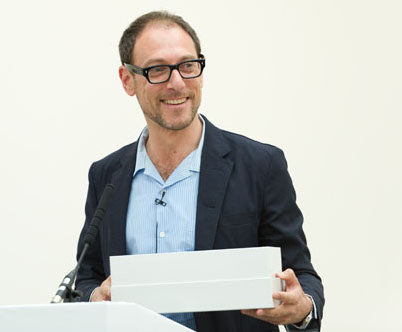 Ben Lewis is an interdisciplinary cultural historian, who works across the media of books, films and print journalism. He is an award-winning documentary filmmaker, author and art critic. his books have been published by Harper Collins, Penguin Random House, Weidenfeld and Nicholson, Elephant Press, Pegasus, and Mondadori, among others. His films have been shown by the BBC, Channel 4, Arte, PBS, Al-Jazeera, ABC-Australia and other major broadcasters around the world. Over the years he has won various awards including a Peabody, Grierson, US National Headliner and German Grimme Prize, and his films have been shown in exhibitions in public museums in Britain and Germany.

Lewis’s latest book ‘The Last Leonardo’ was published by Harper Collins in the UK in April 2019 and by Ballantine, an imprint of Penguin Random House in the US in June 2019. ‘Hammer and Tickle’, a history of humour under Communism was published by Weidenfeld and Nicholson in Britain in 2008 and in America, Brazil, Poland, Italy, among other countries, in the following years.  ‘David Hepher: Grain of Concrete’. Lewis has written two monographs about contemporary British artists, David Hepher and John Loker for Flowers Gallery. His articles have been widely published in the international press, including Die Welt and Monopol in Germany, Prospect Magazine, Sunday Telegraph, The Observer, The Times and the Financial Times in the UK, Libération in France, etc.

Lewis’s unauthorised 90-minute history of the Beatles Apple Corp ‘The Beatles, Hippies and Hells Angels’ was broadcast on Sky Arts in 2017. “Chancers – the Great Gangster Film Fraud” and ‘A Banker’s Guide to Art were shown on the BBC in January 2016. Falciani’s Tax Bomb opened the Barcelona documentary festival in 2015, was one of three films nominated for the German Fernsehpreis, and was broadcast on ARD, Arte and many other European channels. “Google and the World Brain” premiered at the Sundance Film Festival in 2013 and was shown on the BBC, Arte, Al-Jazeera-US and at 60 film festivals. Lewis’ 2012 film “Poor Us: An Animated History of Poverty” was also shown on over 70 TV channels.

Many of Lewis feature documentaries and televised series’ have been on highly topical subjects and have provoked public debate and influenced political decision-making. ‘The Great Contemporary Art Bubble’ stimulated an international controversy, still continuing today, about the art market, while ‘Blowing Up Paradise: French Nuclear Testing in the Pacific” (2004) is credited with influencing the French government’s decision to compensate its soldiers and citizens who suffered illnesses after working on atomic installations in Tahiti.

Ben Lewis is available for consultancy and public speaking on a wide variety of cultural topics, ranging from documentary-film-making to the Internet Communism and Contemporary Art. Over the past decade Ben has gained immense experience of the global cultural scene thanks both to his documentaries, and to his articles and reviews in British, European and American journals.

Ben is available for talks, debates and seminars. In recent years he has to spoken at university faculties across the world, at museums and at high-profile Intelligence Squared debates.