Pandemic & Globalisation : Down with Hysterical Prophetism! – Think-Piece for Kunstforum 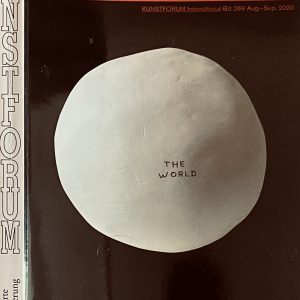 Kunstforum asked me to write them a text on the theme of “Pandemic and Globalisation.” It’s in German in the magazine, but here is the original English:

The second worst thing to actually getting the Corona virus, is reading the endless op-eds and twitter threads by know-it-alls who are harnessing the pestilence in the service of their tired old end-of-the-world views. Corona is the final chapter. It’s the end of capitalism. It’s the end of globalisation. It’s the end of neo-liberalism.  And from the right come the claims that the virus will usher in a new age nationalism and self-sufficiency. It’s the end of China. It’s the end of America. It’s the end of the EU. C’mon everybody. We live in an age of hysterical prophetism and sadly that is not going to end any time soon. What we are living through, an event which has been as predicted (see Bill Gates Ted Talk on pandemic) as it is unprecedented, is something new – the first truly global pandemic and a short sharp shock to the economy caused by biology not debt, the ramifications and consequences of which cannot yet be known. You want me to put my chips down on the roulette wheel of futurology with which our society is obsessed. I refuse! Yes it does all go together – the Great Financial Crisis, led to the Great Recession (economic crisis), led to Brexit, Trump and Populism (political crisis) and now the biological crisis of Covid19. Perhaps there is a way in which we must have been living on ‘credit’, borrowed time and money, borrowing the earth, and now the debt has been called in. Perhaps nature has got us before we got it. Or perhaps this is about the medieval-modern, the Star Wars- or Bladerunner-like contrasts between technology and the peasant underclass, forced to retreat to the edges of the forest and eat bat soup.

Those are only two of many possible theories. Even now we have no idea if the virus came from an exotic food source, bats, in a market, or escaped from a Chinese laboratory, the product of an experiment that went disastrously wrong. It could be a case of science gone mad, or it could be a case of development happening to fast, of traditional practices clashing with new conditions of massive populations and interconnectedness. But, give me a break, I haven’t yet worked out how it all goes together. How can I? I have no idea if the wheels have finally come off the wagon this time, or if somehow they are going to stick them back on like they did last time by printing lots of money. Anyway there is more good than bad with globalisation and neo-liberalism – more people have been lifted out of poverty in the last half century than in any other time in history. We just got a bit carried away. The rules were not enforced. We ended up living in The Age of Impunity.

What we need to get rid of does not seem to me to have come under attack from the virus: it is the invisible parallel offshore economy based on tax havens and banking secrecy, where the wealth of nations is siphoned off by a global oligarchy. If tomorrow profits were taxed where they were made and this vast offshore wealth was redistributed amongst the citizens of nations, then the multiple causes of this latest instalment in our series of crises would be addressed.