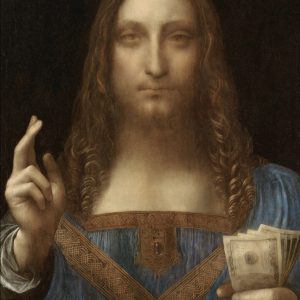 On April 1st 2021, I launched my first NFT, the Salvator Metaversi, with stories in The Art Newspaper, Hypebeast and the US Observer, among others. The NFT was offered for sale on Opensea, where it sold for 1.8 Ethereum, which at the time meant I ended up with £2600 in my bank account. I donated all the profits to the Hendry family who owned the original Salvator Mundi from 1958-2005, and who only made $700 when they sold the painting in 2005. The buyer of my Salvator Metaversi is currently trying to sell it for almost $70,000 in crypto-currency.

Ben Lewis, the author of the 2019 publication The Last Leonardo, has created an NFT (non-fungible token) of Salvator Mundi by Leonardo da Vinci showing Christ with his right hand raised in blessing—and his other hand clutching a fistful of dollars. The NFT will be minted today on the Opensea platform and auctioned over the Easter weekend (UK).

The controversial Leonardo painting sold for $450m at Christie’s New York in November 2017; any profits from the NFT sale will be split between Lewis and the Hendry family, based in Baton Rouge in Louisiana, who, as revealed in Lewis’ book, sold the painting at auction in 2005 for $1,175 (with fees). The family received $700 after fees were deducted.

In The Last Leonardo (2019, William Collins), Lewis told the “thrilling tale” of the Salvator Mundi, charting its journey from the studio of the artist to its consignment at Christie’s and disappearance from view post sale. Now Lewis is starting a new chapter, minting the Salvator Mundi under the pseudonym Crypto Leonardo.

His NFT, titled Salvator Metaversi, refers to the alternative digital reality of the metaverse: “ a shared virtual space [with] its own economy, complete with jobs, shopping areas and media to consume”, says the technology writer Gene Park. Lewis says: “The original title of Salvator Mundi means savour of the world. Metaversi looks to the new world, the enlarged online domain dominated by blockchain and cryptocurrency.”

The original long-lost Leonardo painting was in the possession of Basil Clovis Hendry Sr, who owned a Louisiana sheet-metal company, before Old Master dealers Robert Simon and Alexander Parrish bought it from the estate sale in New Orleans in 2005 for less than $10,000. Christie’s initially rejected the work but after more than a decade it got a second chance, heading to auction in 2017.

“My target price is $450m in Ethereum [currently 234,043 ether]. If it doesn’t sell, I want to at least draw attention to the crazy excesses and injustices of the art market where families, who are unaware of the complexities of the art market, sell heirlooms for small change and receive no resale fees when the work turns out to be a sleeper, the art market term for an undiscovered and undervalued old master painting ,” Lewis says.

Beeple sold his NFT Everyday: The First 5000 Days for $69.3m with fees at Christie’s earlier this month. “Artists will get a percentage of NFT secondary sales; I’d like to see a similar practice adopted by the auction houses with a percentage of the resale of family heirlooms and treasures going to the original owners,” Lewis says.NFT platforms offer artists a percentage of all future sales but resale fees are only paid if the work is resold “on-chain” by the platform that minted the NFT. An industry insider says: “The platforms have the option of honouring the resale-royalty percentage set forth in the original contract, but it is not automated unless resold on the original platform. That is true across the industry as each smart contract is specific to the marketplace that created it.”