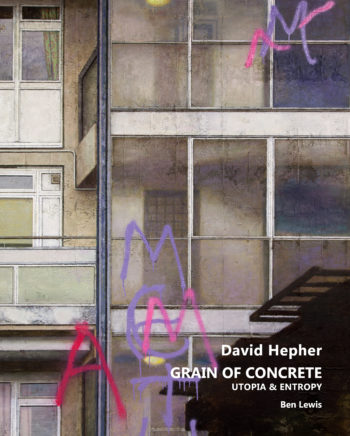 For forty years British artist David Hepher has centred on a single subject, the high-rises of South London, through which he has channelled the diverse currents that have swept the international world of contemporary art. His multivalent work has both celebrated and mourned modernism in modes that are futuristic and nostalgic, utopian and entropic. David Hepher: Grain of Concrete, Utopia and Entropy is the largest book to have been published on Hepher’s practice.

For over forty years, British artist David Hepher has centred on a single subject, the high-rises of South London, through which he has channelled the diverse currents that have swept the international world of contemporary art. His multivalent work has both celebrated and mourned modernism in modes that are futuristic and nostalgic, utopian and entropic. Grain of Concrete presents a retrospective view of the sustained development of this subject from Hepher’s burgeoning interest in the urban landscape during the late 1950s to the monumental tower-block paintings of the present day.

His early works were painted in the realist style of the British Euston Road school, reflecting the influence of Hepher’s undergraduate training at Camberwell School of Art during the 1950s. Upperthorpe 1957 and 1959 portray urban views of terraced houses in Sheffield, pictured in the shadow of the industrial buildings and hills beyond.

Continuing his pursuit of a heightened sense of realism throughout the 1960s led to the development of a ‘deadpan’ approach to painting by the end of the decade, eschewing gesture in favour of a neutral subject matter and style. In a series of near life-size paintings of typical Edwardian terraced houses on a London street, every detail of the airless suburban scene was recorded with meticulous precision in an attempt to remove all trace of the artist’s hand. Of this series Hepher wrote: “I would like my paintings to be about the sound of someone mowing the lawn, about putting the cat out and privet hedges, about tidy houses and instant coffee, about grey skies and boring afternoons, hybrid roses and trading stamps…”The originality of Hepher’s suburban realism and its focus on the banal and ordinary attracted considerable critical attention, and the Edwardian terraces were exhibited at the Serpentine Gallery in 1971 as well as providing the focus for his first exhibition at the Angela Flowers Gallery in 1972.

Turning his attention to the opposing urban scale and ‘austere grandeur’ of the expansive modern social housing estates built in the 1960s and 70s, Hepher was attracted to the formal beauty of their grid-like structures and fascinated by the physical and emotional traces of their many inhabitants. Camberwell Flats by Night, painted in 1983 reflects a contrast between the anonymous public facades and the private lives within, represented by the irregular colours and patterns of the interiors glimpsed through illuminated windows.

A Triptych for Mark, 1991-92, Oil, acrylic, plaster and PVA on canvas 252 x 571 cm, 99 1/4 x 224 1/2 in
In his works of the 1990s, Hepher began painting at a monumental scale, often across multiple panels. A Triptych for Mark, the first painting of this period, pictured the landmark modernist blocks designed by Colin Lucas, which were commissioned by the Great London Council across South London. Here, the dispassionate realist style of Hepher’s early work was replaced by an increased engagement with the physical nature of the subject matter, incorporating appropriated architectural elements such as concrete and spray paint in his mixed media paintings.

Works such as From Peckham to Athos were prepared with bituminous paint and a brutal shuttered concrete ground, which replicated the builder’s application of textured facades, and pushed the paintings to the brink of abstraction. Pours of paint, drips and staining disrupted the ordered geometry of the compositions and reflected the increasing decay of the buildings. In the case of Moonface, the canvas itself was ruptured, suggesting a violence that Hepher asserted was “an emotion not a hundred miles from the myth of the buildings.” Surfaces were overlaid with the spray-can daubs and slogans of appropriated graffiti alongside borrowed art historical motifs, with playful interchanges of meaning demonstrating, as author Ben Lewis has pointed out, Hepher’s “adoption of Conceptual Art’s recurring play on the relationship between images and language…” *

Hepher’s most recent painting Art 4 All represents a return to the human scale of the earlier terrace paintings, also seen in the recent Pavement Horizons series of 2014.This large triptych presents a horizontal slice of the tower block facade from a frontal perspective. By focusing on a reduced area of the building, Hepher has replaced the overpowering effect of the tall building with a closer, more immersive view. As he has described, “you get the sense you’re actually standing there in front of a block itself.”

Born in Surrey, England in 1935, David Hepher studied at Camberwell School of Art and then the Slade School of Art, London, where he later became Professor and Head of Painting. His work is featured in national collections includingTate,Victoria and Albert Museum, Arts Council England and the Contemporary Arts Society. His work has been exhibited in solo exhibitions at London’s Serpentine, Whitechapel and Hayward Gallery and was included in Unpopular Culture: Grayson Perry Selects from the Arts Council Collection, Hayward Touring; British Council Collection: My Yard, Whitechapel Gallery; Out of Britain, National Museum in Riyadh, Saudi Arabia; and Reality: Modern & Contemporary British Painting at the Sainsbury Centre for Visual Arts, Cambridge and the Walker Art Gallery, Liverpool, UK.